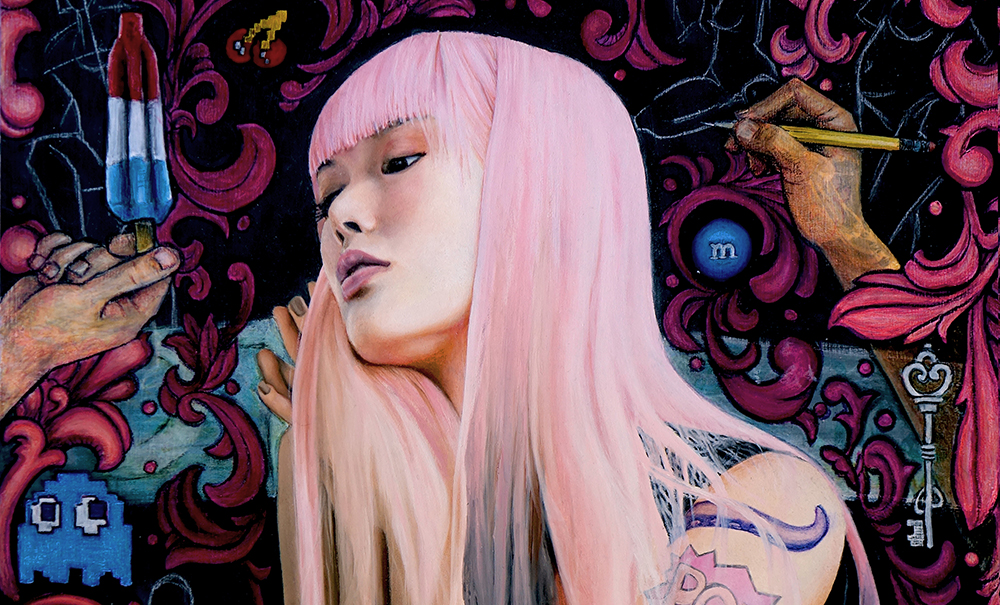 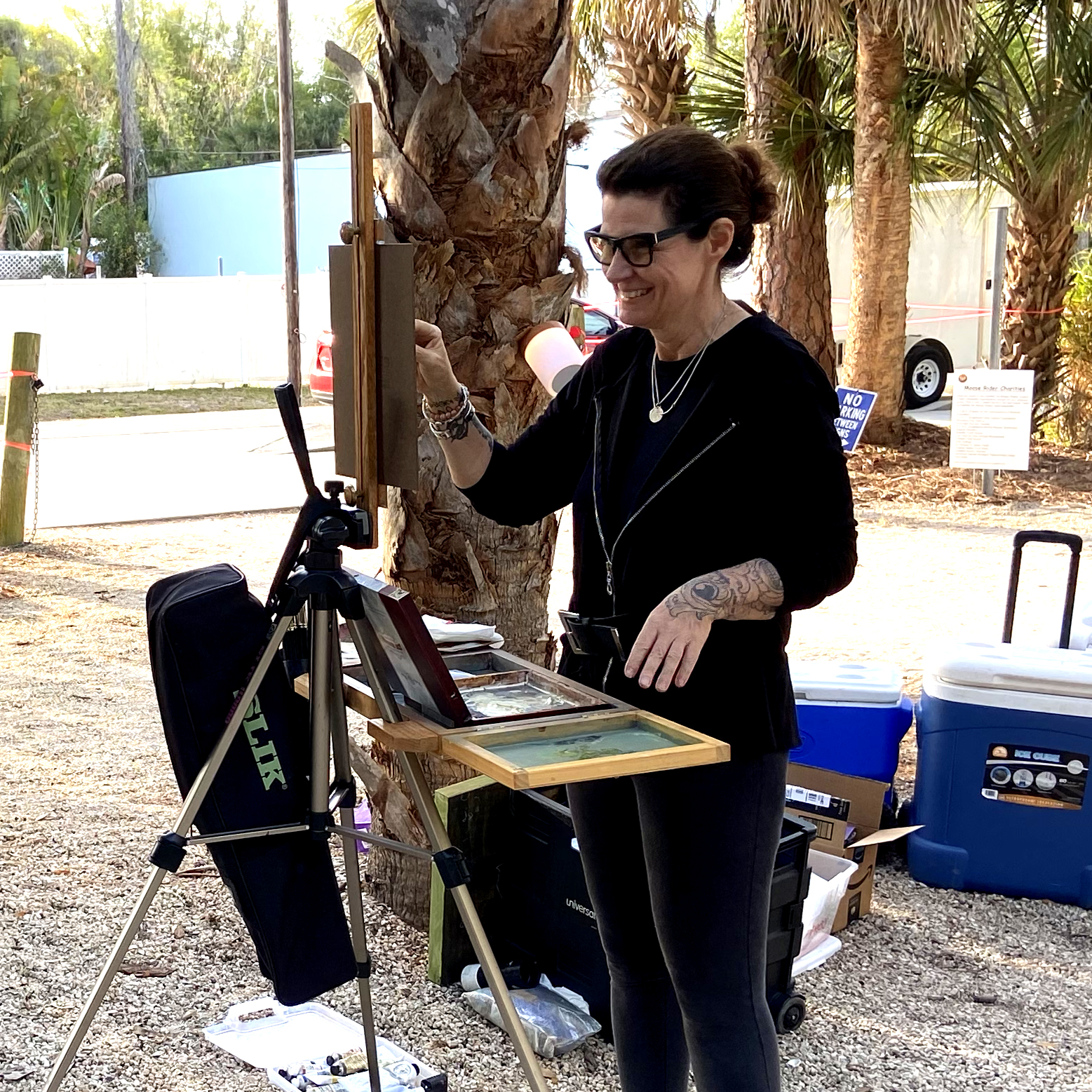 I’ve been slowly working on this painting that my friends have started calling Pink Girl for a while, mostly when I find time between other projects. She’s so much fun but I don't usually work this way. This method is called indirect painting. Working slowly, layer upon layer very thinly building up the painting. It gives you an interesting effect. I'm usually too impatient. I usually work in direct method or what they call alla prima — a thicker, more direct application of the paint and fewer sittings, often only one.

As her background started taking shape I would draw whatever popped into my head – don’t judge me! And that’s kind of where the whole concept was born. Dreams, daydreams and nightmares, fleeting ideas and scattering thoughts drifting through our minds, melting away, just on the edge about to pull us in and then gone but the more I worked on it the more it became.

A pop cultural odyssey where I stumbled across these little peppermint tombstones like the Michelin Man like he was in Ghost Busters (Don’t think about the Michelin Man), the Pac Man ghosts (and those cherries and bananas I hadn’t thought about in years) and they made me think about songs that were popular at the time, I was in college then majoring in figure drawing.

One after another these images came and I’d draw them and it really felt like I was chasing ghosts from the past. Your mind offers up memories like bomb pops but as soon as you take ahold of them they’re already melting away.

This one was fun. Here are some progress shots. 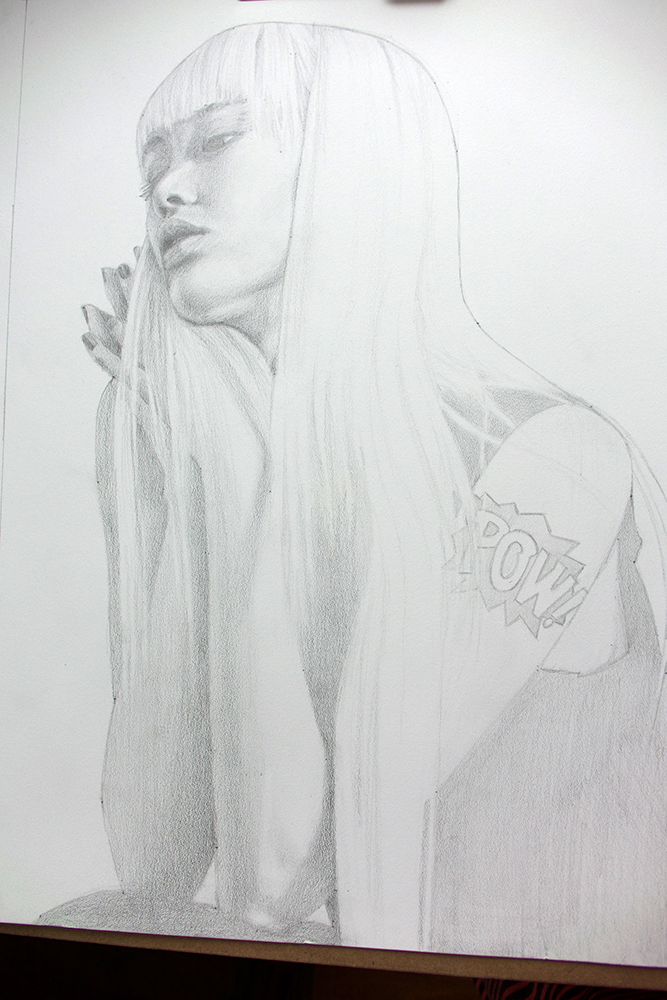 First I did a graphite drawing to really spend some time with the model before I painted her. These long pose drawings take quite some time but they’re worth it. It’s good drawing practice and then by the time I paint her I’m very comfortable with the figure. This drawing is the same size as the canvas 16 x 20. 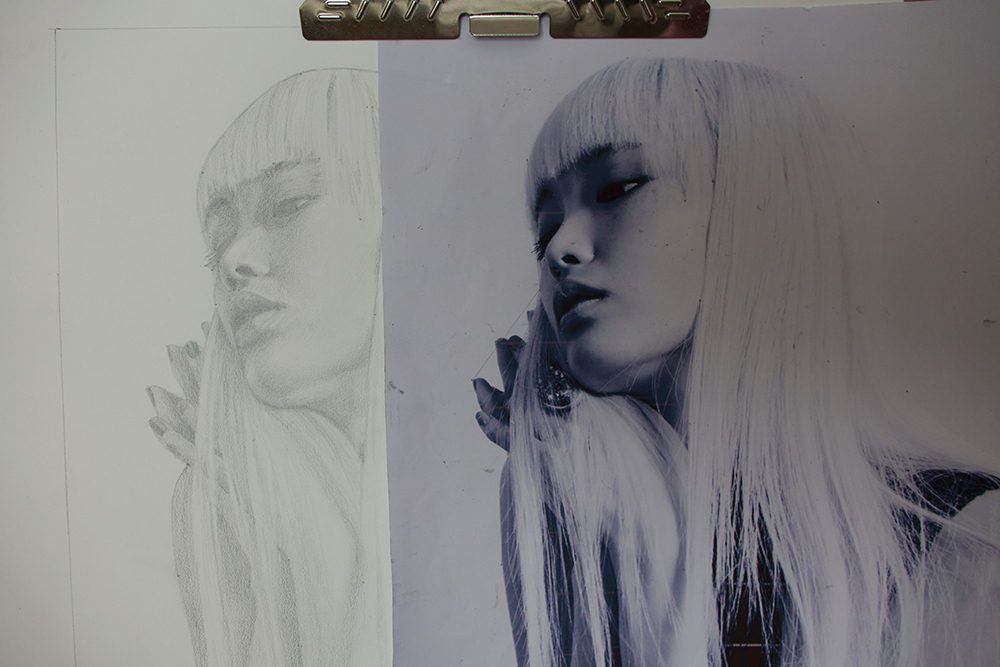 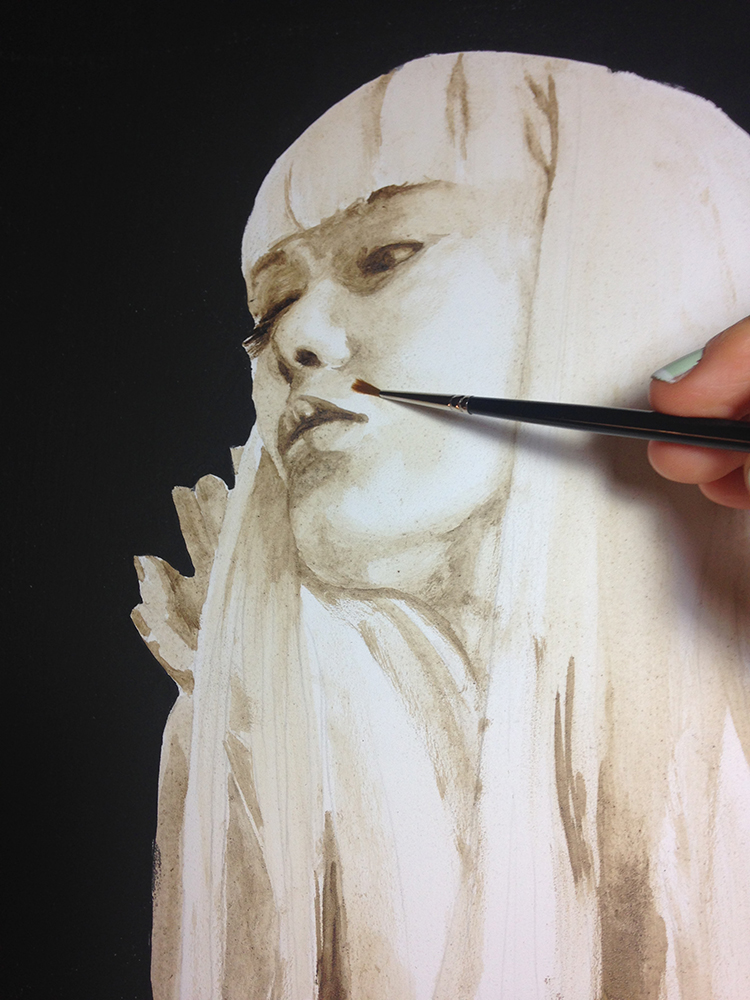 Then I did a quick underpainting after I transferred the drawing down to the panel just to kind of lock in the major forms. I have black gesso around her and kept it white under her with only a light toning under the grisaille. 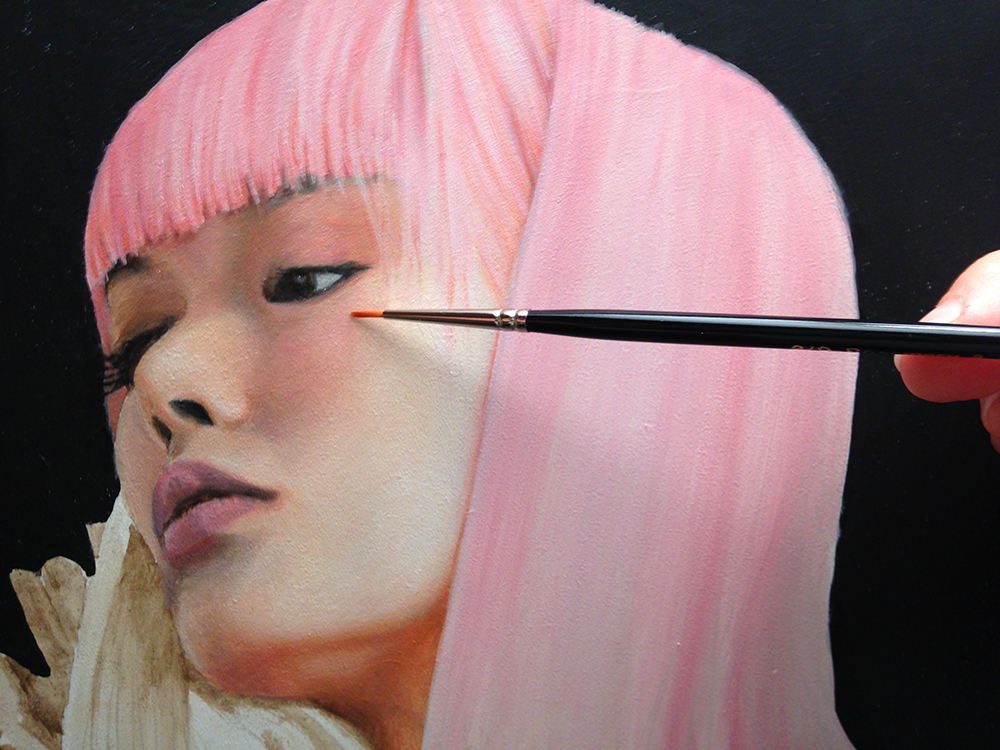 After the first color pass is complete I began some work on the background images. I did some image transfers of my own photographs here and worked directly with conté pencils but no paints. The image transfer process is one I have been using in my art for nearly 20 years. It always adds this nostalgic look that I love. 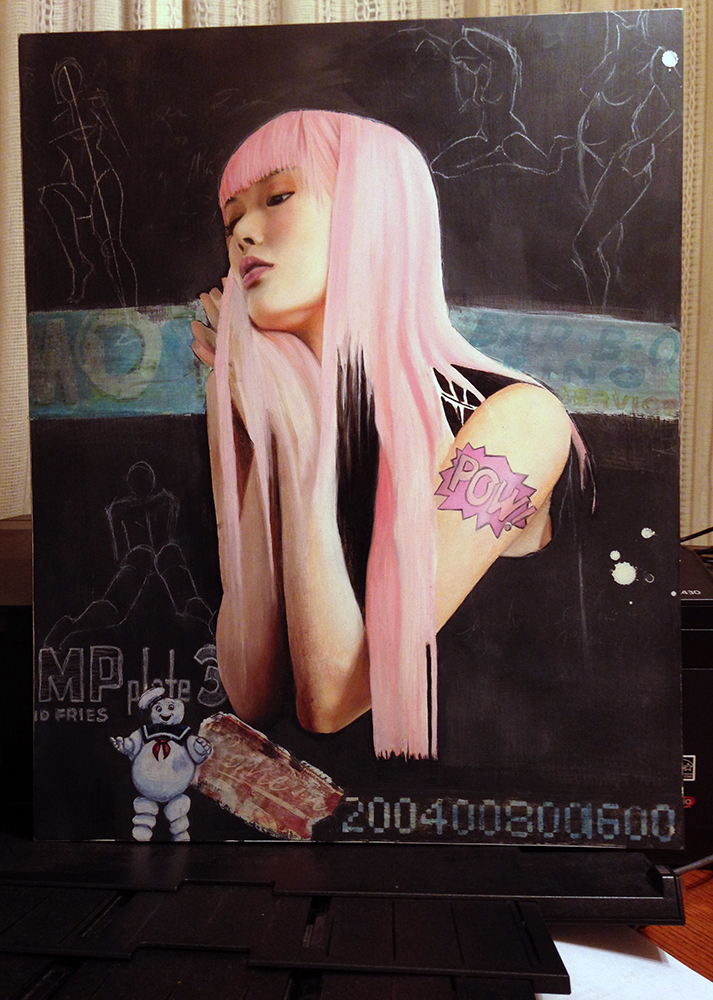 The red Come In We’re Open sign along the bottom was, to my thinking an invitation into her thoughts and mind. I love vintage signs. I never know when I start placing these elements in what will even show through in the final piece. But it was a starting place. It felt foundational putting it there. Along with some of my old life drawings from school. It was a start.

Keys and hands are repeating themes for me… I could take a guess but sometimes you just could leave well enough alone.

The hands are very Escher if you think about it. Let’s say that! I have similar Baroque scroll running from the top of my left hand up my arm so that’s just a thing with me. 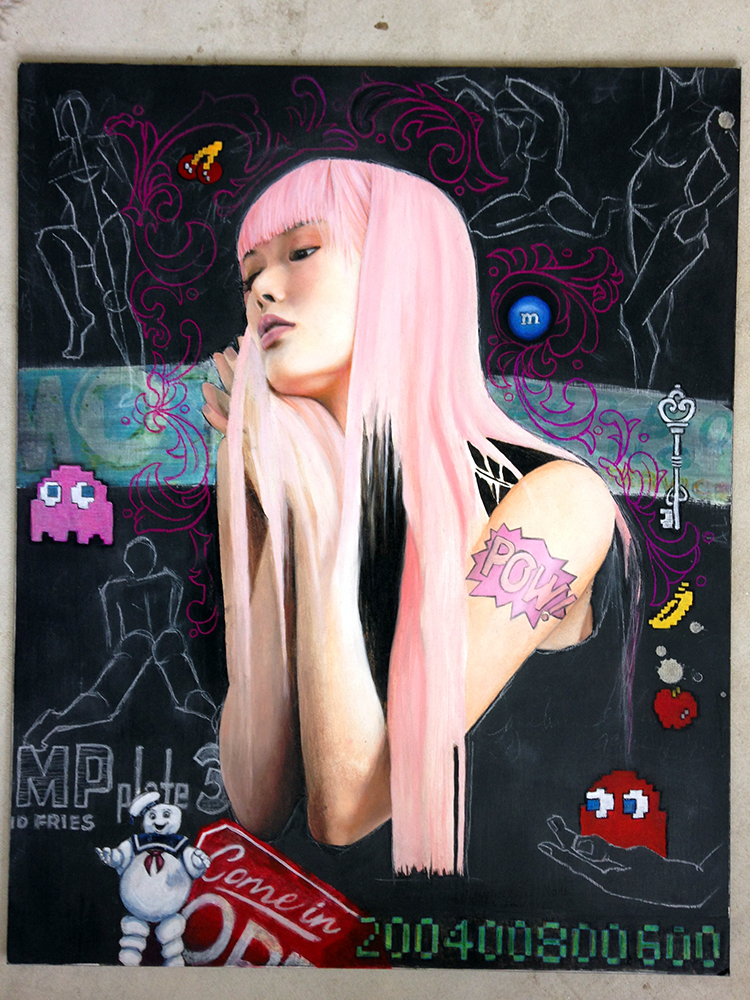 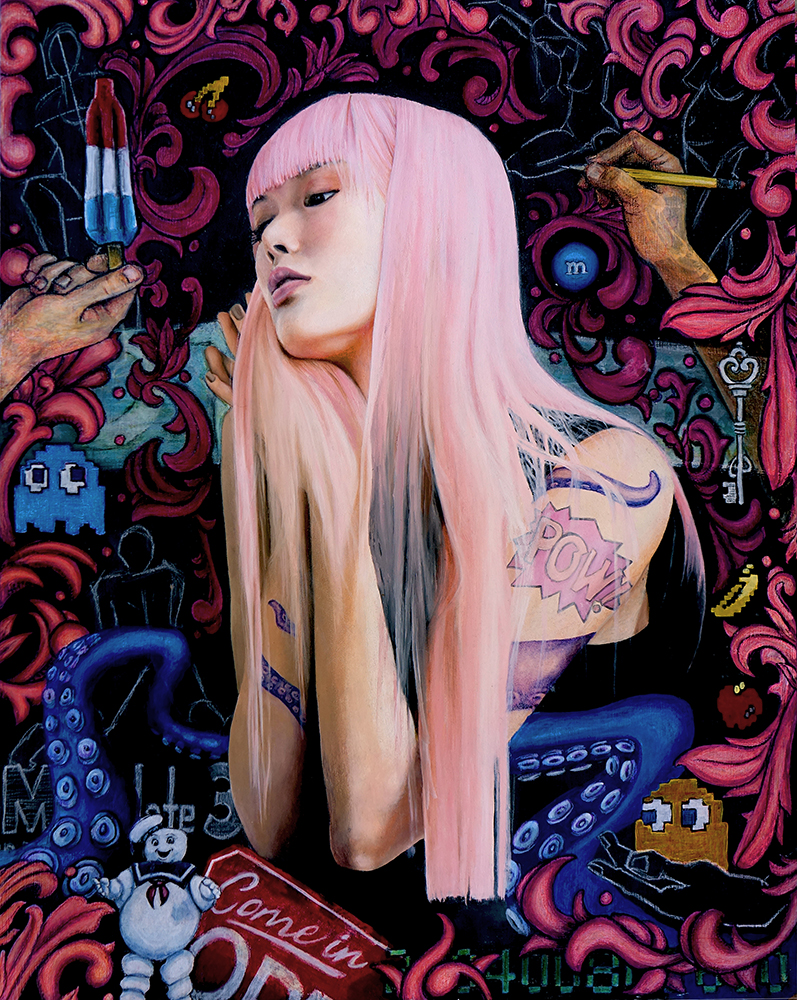 The octopus is so symbolic of so many things that I won’t begin to mention it. It’ll take all the fun out of it. It’s fun now to look back at how this progressed I’d forgotten myself actually.

Post Update 3/15/17: I did a little more work on her, just some finishing touches, varnished her and had my friends at Englewood Frame in Olde Englewood Village put this gorgeous double frame on her. It’s about 4″ in depth off the wall and adds another 4″ in each direction to the overall dimensions of the piece. (36″ x 26″ ish)

It’s formidable without taking away from the painting. I can’t recommend them highly enough if you live in the area. I rely on their taste so much when I frame as well as their overall expertise. They are just amazing. 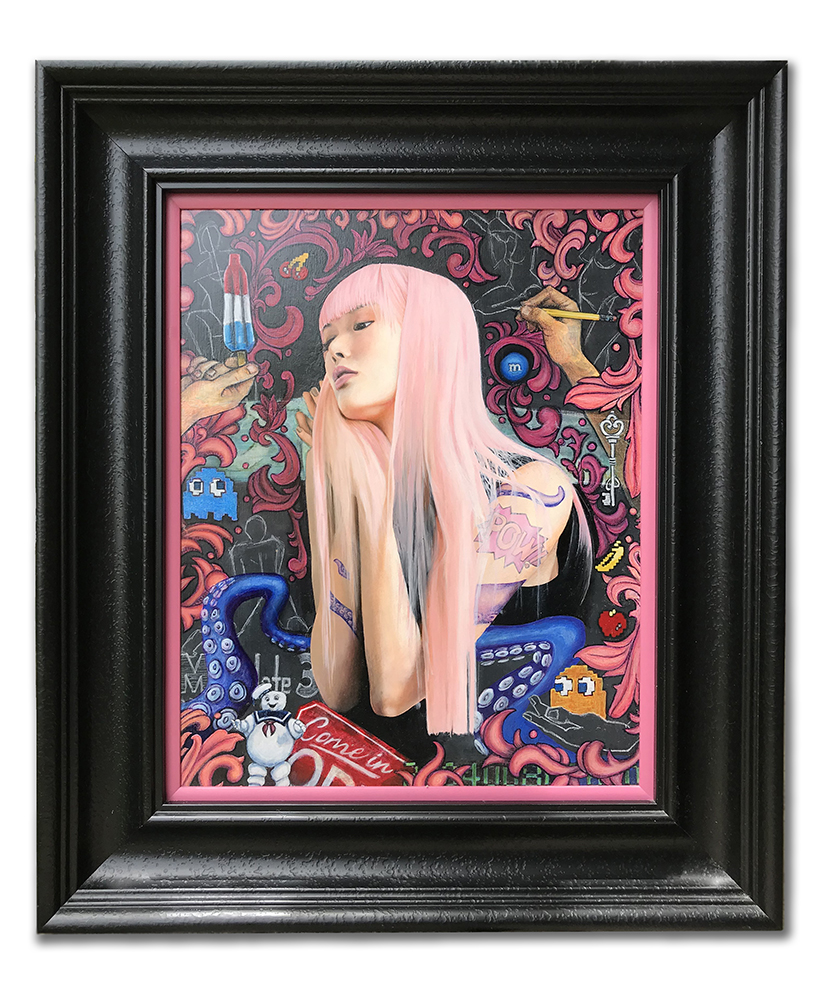